The name of this ministry is Giving An Answer. This is based on the command in 1 Peter 3:15 that all believers know how to defend the Christian Faith. 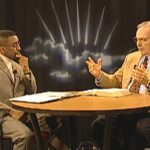 The purpose of Giving An Answer is to demonstrate to an unbelieving world that Christianity is the true Faith, and that the true Faith is based on sound evidence. It is also the purpose of this ministry to equip Christians with the evidences of their faith. As a result, Christians will be both built up in their own faith and better able to win others to Christ.

Giving An Answer is a 501(c) (3) non-profit organization, all donations are tax deductible.

Nature of the Ministry

Giving An Answer currently reaches the entire country with a show that is apologetically based and emphasizes the defense the Historic Christian Faith. The program follows a talk show format with the host, Harold C. Felder, interviewing guest on important issues for Christians such as doctrines and evidences for our faith, as well as understanding and responding to other world views, religions, and cults.

The Giving An Answer broadcast can be heard on local radio in the Charlotte North Carolina area as well as parts of South Carolina, reaching a population of over 1,000,000. The show also airs on local cable in the Charlotte North Carolina area, reaching an audience of 350,000 people. In addition to media, the ministry is involved in bringing the ministry directly to the people through speaking opportunities. Furthermore, this website itself serves as an outreach by providing online resources such as shows and articles in defense of the Faith.

The need for apologetics has never been greater. It is a must for our youth in their struggles against the anti-Christian culture in which they live. It is also needed by every Christian, that they may be able to discern false teachings and evangelize a skeptical world.

It is in response to the above challenges that Giving An Answer was formed. Christianity is not some blind leap of faith, but faith based on evidence. Blind faith is never commended in the Bible. God gave us reason for a reason. It is through our reason that we can come to a proper faith in the God of the Bible. Blind faith cannot give reason to believe in Christianity over Islam or any other religion. If people actually used their reason, they would come to the conclusion that Christianity is the true religion. It is blind faith that keeps people in bondage to the lies of various other religions and cults.

Abraham’s faith in God was not blind. He had seen God perform miracles such as the destruction of Sodom and Gomorrah. God revealed Himself to Abraham. Abrahams’ faith was based in evidence. In fact, when God told Abraham to sacrifice his son, “Abraham reasoned that God could raise the dead” (Heb. 11:19). The same is true with the rest of those mentioned in Hebrews eleven’s faith hall of fame. They expressed faith in God, but never was it blind faith. This is repeated in the New Testament. We read about Paul’s missionary journey’s in Acts, in which Luke writes “As his custom was, Paul went into the synagogue, and on three Sabbath days he reasoned with them from the Scriptures, explaining and proving that the Christ had to suffer and rise from the dead” (Acts 17:2), and “Every Sabbath he reasoned in the synagogue, trying to persuade Jews and Greeks” (Acts 17:3). Furthermore, Paul commended the Bereans because they “examined the Scriptures every day to see if what Paul said was true” (Acts 17:11). Furthermore, if God did not expect people to believe in evidence, then He would have never performed miracles. Jesus Himself said “even though you do not believe me, believe the miracles, that you may know and understand that the Father is in me, and I in the Father” (John. 10:38). Not even Jesus expected belief in Him without evidence.

Enter Giving An Answer. There is an abundant evidence for the Christian faith. The Resurrection is a historical fact. The Bible is the Word of God. The God of the Bible is the True God of the universe. All of these truths are based in evidence. It is the ministry of Giving An Answer to provide these answers to churches, schools, and other organizations. By visiting these groups and giving classes, talks, and workshops; Giving An Answer seeks to prepare Christians to obey the command of the Apostle Peter to “Always be prepared to give an answer to everyone who asks you to give the reason for the hope that you have” (1 Peter 3:15).

With the continuing TV and radio ministries, Giving An Answer is reaching a potential audience of hundreds of thousands in the Charlotte NC area. Weekly, evidence is given in support of the Christian world view. Those who have never heard the evidence before have an opportunity to hear a unique message. No other show is providing the information found in the Giving An Answer programs.

In order to serve those outside of the Charlotte area, a number of the programs are available online. These programs are accessible to anyone in the world with an internet connection. The site also supports podcasting, which allows users to download episodes of the show directly to their iPod, or any mp3 player, for listening anytime at their leisure. This is provided as a free service with the intention of reaching the broadest possible audience.