Dr. H.C. Felder is a former atheist and NASA Software Engineer. After becoming a believer and being exposed to the truth of Christianity, he has dedicated his life to sharing that truth with others. He has an undergraduate degree in Computer Science, and both a Master and Doctorate degree in Apologetics from Southern Evangelical Seminary in Charlotte NC. He has articles published in a scholarly journal on the topic of Racism and the Bible. He is the author of The African American Guide to the Bible, which deals with the inspiration of Scripture, the Black presence in the Bible, the Bible and racism, and the unity of mankind.

H.C. is also the founder of Giving An Answer ministry (www.GivingAnAnswer.org), which focuses on giving evidence for the Christian faith. He speaks at churches and at various apologetics conferences around the country. He currently resides in Charlotte, North Carolina, with his wife and their four children. 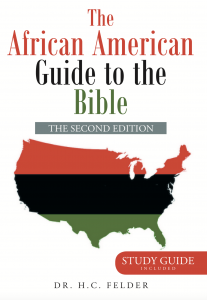 The African American Guide to the Bible makes the case for the relevance of the Bible from the perspective of people of color. It presents a comprehensive biblical view of topics of interest to African Americans and clarifies racial issues for white people.

Part I addresses the inspiration of the Bible by giving evidence for its authenticity. A considerable amount of time is spent on examining the original text of the Bible, the archeological evidence, and the evidence from predictive prophecy to demonstrate the uniqueness of the Bible.

Part II deals with the black presence in the Bible by demonstrating the prominence of people of color and black people in particular by highlighting their importance in the plan of God. It explains what it means to be black and demonstrates that the scientific and biblical evidence are both consistent with respect to race.

Part III is a response to the arguments of racism used by critics of the Bible. For example, “Christianity is the white man’s religion” and “The Bible supports slavery and racism.” These arguments are examined and evaluated in light of scripture and the context of history.

Part IV deals with the unity of humanity from a biblical perspective. It shows why racism is not only unbiblical but is evil when understood from the perspective of God.

The arguments advanced in this book are the result of scientific and biblical analysis to present a unified view of humanity.

The book also contains a study guide which includes questions at the end of each chapter to emphasize the major points.  This is beneficial for individual as well as group study.  An online component is available to guide in a more in-depth comprehension of the material.